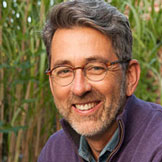 Craig Bergmann is a registered landscape architect, garden designer, plantsman and lecturer. He received a BS in biology from DePaul University in 1981 and founded Craig Bergmann Landscape Design, Inc. in 1982. All design is done under his supervision.

Bergmann’s award-winning work has been featured in several books including Rosemary Verey’s The American Man’s Garden, Mary Riley Smith’s The Front Garden, Susan McClure’s Midwest Garden Design, and Page Dickey’s book Inside Out: Relating Garden to House, as well as in such periodicals as Garden Design (Golden Trowel Winner in 2007), House Beautiful, House & Garden, Traditional Home, Midwest Living, Fine Gardening, Horticulture, Chicago Magazine, Forest & Bluff Magazine and Chicago Tribune Magazine. Bergmann and his own garden was featured on the PBS television series The Victory Garden in 1998 and on HGTV’s Gardener’s Journal. His own gardens and others of his design have been included on The Garden Conservancy Tours for many years. Bergmann is the editor of the book Midwestern Landscaping, a comprehensive and practical guide to gardening in USDA Climate Zone 5. He is on the board and Vice President of the Garden Stewards of the Elawa Farm Foundation. He has received numerous awards for his preservation installations.

Craig’s landscape design business has been headquartered at 900 North Waukegan Road in Lake Forest since 2011. The coach house and two gatehouses were designed by the famous North Shore estate architect David Adler in 1917 for A. Watson Armour. Bergmann and interior designer Paul Klug have completely renovated two of the three buildings and reinvigorated the property with the garden installation. Keeping the original Armour garden plan in mind, Bergmann used much of the plant material from the Country Garden display gardens and recycled historic materials to create similar border gardens with statuary. Beyond that he has re-imagined the entire two and a half acre property, installing additional garden rooms, a pool area with espalier apple trees, revitalizing the orchard with a dove cote, and restoring the motor court with borders containing Mrs. Armour’s original irises.

An animal lover, Craig is the proud owner of Violet, Pepper and Watson, three Norwich terriers, who preside over the property and design studio. A flock of frill-back pigeons and homing doves are housed in the Old Kennel House.